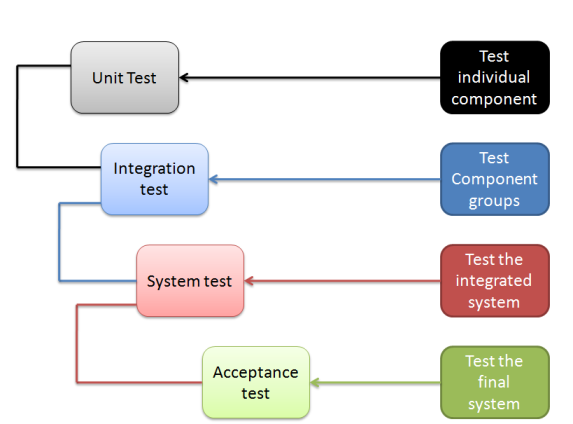 In this series about testing, we will share some information about Testing levels. These are some concepts we came to know when starting to know about software testing. We hope that they will be helpful to you.

The first level of Testing levels-Unit testing, also known as component testing, refers to tests that verify the functionality of a specific section of code, usually at the function level. Unit testing is done on a small piece, or unit of code. Nunit, TestDriven.NET is a tool to test units.

Integration testing is any type of software testing that seeks to verify the interfaces between components against a software design.

The purpose of IT is to test the functionality, reliability and performance of the system when integrated.

IT is done on modules that have been UT tested and then IT will determine whether the combination of modules will produce the desired output. IT can either be done by independent testing or by the programmer.

System testing tests a completely integrated system to verify that it meets its requirement. It is a method of monitoring and evaluating the behavior of a complete software product or system and has been fully integrated, based on pre-defined specifications and functional requirements. It is the solution to the question “Does a complete system work properly according to requirements?”

The last one of Testing levels, the system is delivered to the user for acceptance testing. In this type of testing, the software is tested by the user to find out if the software meets the user’s expectations and performs as expected. During this test phase, the tester may also perform or the customer has their own testers to perform.

There are two types of acceptance testing: Alpha testing and Beta testing:

Pros and cons of Alpha and Beta Testing

What should businesses do during the Coronavirus pandemic?
April 1, 2020