When B2C enterprises use mobile applications to attract consumers’ engagement in e-commerce, banking, and marketing; B2B firms use them to manage the company’s operations, tracking the performance of employees, and collaboration with partners. Come with the rising frequency of mobile application usage is the demand for increasing the application quality. If you want to update the latest movement in quality assurance for mobile applications, let’s look at our top 5 mobile testing trends below.

One of the characteristics of mobile applications is that the developers have to release the new version frequently to adapt to the demand of users. Due to this, numerous test cases need to run repeatedly. This is where test automation became an innovative solution. In the World Quality Report conducted by Capgemini, 57% of the companies said that test automation helps to reuse the test case. Meanwhile, 65% of them stated that the test cycle time is reduced. 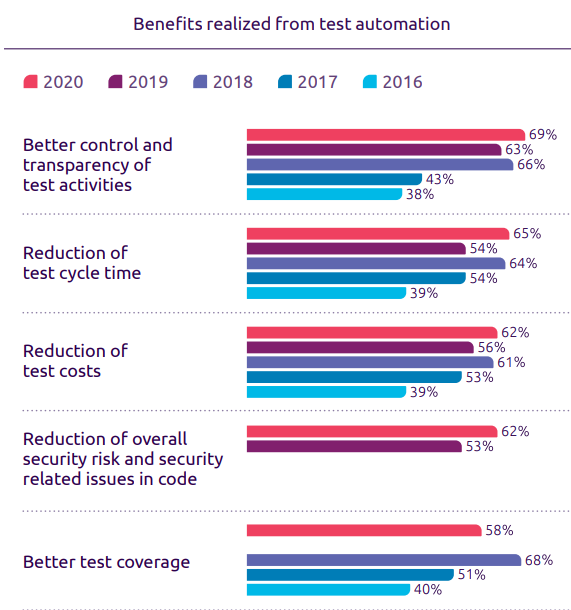 The greater return on investment in automation not only came from benefits in cost and efficiency but also came from achieving business objectives such as time-to-market. Moreover, it seems like this year CTO concerns more about transparency and security in testing. 69% of them responded that test automation helps them to have better control and transparency of test activities; 62% of respondents think test automation reduces the overall risk.

The Internet of Things (IoT) allows us to control our assets such as smart home appliances, smart cars, or smartwatches by using a mobile application. Testers need to ensure the quality, security, connectivity, and performance of the application so the interaction between mobile apps and IoT devices is not interrupted. However, executing integration testing is not easy due to IoT devices often having a cloud-based interaction layer developed by a third party. Besides that, testers also concern about the enormous number of test cases needed to run because of the diversity of IoT devices. Testing on emulators, therefore, cannot fulfill the requirement of the QA team. As a result, testing in the cloud is becoming more popular.

Although facing many obstacles, firms are finding ways to adapt to the IoT trend. Many companies consider applying Artificial Intelligence capacity to test thoroughly and also conduct more IoT-experience testing.

Impact of 5G on Mobile Testing

5G provides greater bandwidth, which means faster data rate and better user experience. With this technology, the 5G network will allow 360-degree video streaming and VR / AR experience. Consequently, testing mobile applications in a high-speed internet office will not be efficient enough. Besides, the latency of data transfer is reduced. It allows faster information receiving within far distance, which has a huge impact on the performance of mobile applications. Meanwhile, mMCT supports connecting with a large number of IoT devices using less power; which leads to changes in battery testing for mobile devices.

Agile and DevOps has become a popular method in continuous testing. They combine the know-how and skill of both testers and developers to support each other with the ultimate goal of fastening the development and deployment of applications. Agile and DevOps approach helps enterprises to find and fix defects more efficiently and release new versions more frequently.

According to the World Quality Report, the Scale Agile Framework (SAFe) and the Dynamic Systems Development Method (DSDM) among Agile methodologies are the most favored by IT firms. From 2015 to 2017, SAFe increased from 31% to 58%; meanwhile, DSDM has grown by 31%. The same report also stated that over 88% of respondents applied DevOps principles in their IT team.

Mobile users reached 1.5 billion at the end of 2020. The mobile devices will have different OS versions, screen resolutions, and data storage. It causes obstacles in mobile testing since firms are not able to buy every kind of mobile phone. As a result, testers tend to use the cloud to test real devices.

Another reason for the increase in using cloud-based testing environments is the virtualization trend in recent years. This will push the demand for cloud and virtual testing tools higher and open more opportunities for firms to provide cloud-based testing services.

Since the booming market of blockchain technology in the IT industry, many have predicted a new and exciting field of better security, higher authenticity and decentralized operations.

Since blockchain technology is rather an immature field of the IT industry, there is more to be explored with this. To ensure a system of decentralized, cost-effective and time-saving activities, blockchain engineers have to employ and adapt to cutting-edge technology and brand new concepts, making them more prone to mistakes.

Under this circumstance, blockchain testing is now an in-demand service that requires a thorough understanding of the blockchain architecture and full test strategy planning.

Blockchain testing should include:

With the world’s economy stepping into the recovery phase after the pandemic, many enterprises are trying to revamp their performance with the adoption of big data in their operation and upcoming business plan.

The most prominent approach towards their customers is to collect and min huge data volumes and diverse data types to indicate user behaviors. From these analytical research and collection, one might categorize and analyze their behaviors to find the best matching solution to approach their customers.

To enhance the efficiency of big data in multiple fields with a bigger scope, you would want to implement big data testing, which can help to make improved decisions with accurate data validations. With big data testing facilitates the consistent application of how the datasets perform, market targeting and business manifestation are further streamlined to cope with the ever-changing market.

Cybersecurity has always been at the top of the IT industry’s problem with billions of dollars stolen each year. In recent years, many companies have been applying an array of measures to assure cybersecurity within their system and products.

Especially with the fear of data breaches, cybersecurity is gaining its importance in business’ systems and becoming the foremost necessity.

This situation is common across many subdomains of the IT industry, leading to a growth in security testing of from USD 6.1 billion in 2020 to USD 16.9 billion by 2025, at a Compound Annual Growth Rate (CAGR) of 22.3% during the forecast period.

This growth of security testing has brought brighter prospects to the world’s cybersecurity. With the stronger and more effective security measures, cyberattacks, data breaches, malware, etc. will be reduced to their smallest. With this new implementation, digital transformation will be more successful than ever.

Artificial Intelligence in general and Machine Learning in particular will be the omnipresent technology in the next few years.

As the need for virtual assistants, autonomous cars, etc. are more rival than ever, AI and ML will make a bigger step in the IT industry with top investment priority of CIOs in 2025. As predicted in 2020, the AI and ML market will grow to be about $6-7 billion in America. Technology for behavior prediction, speech recognition is beginning to be adopted and implemented in our daily lives, and it seems to be never enough.

The booming development of AI and ML demands better technology, bigger implementation and breakthrough advances, hence the need for a flawless operation of AI and ML. To achieve this, the most effective and viable solution is AI and ML testing. Since the AI and ML themselves are pretty new in the market, testing for them is quite challenging, yet exciting.

Although automation testing is on the rise, many testers are struggling with the high-maintenance, script-based testing approach, not to mention the dragging training time. To make it easier and faster for testers to execute tests, many have followed scriptless automation testing.

Since it is scriptless, testers have to utilize multiple tools to acquire desirable test results.

All in all, the trends in 2021 made the QA team face many challenges. How to perform mobile testing with the right strategy remains a hard question. Knowing this constant problem, Lotus QA provides a free consultant for mobile application testing to help you enhance the quality of your product.